Daily Life in Turkey! What do Turks like to do? 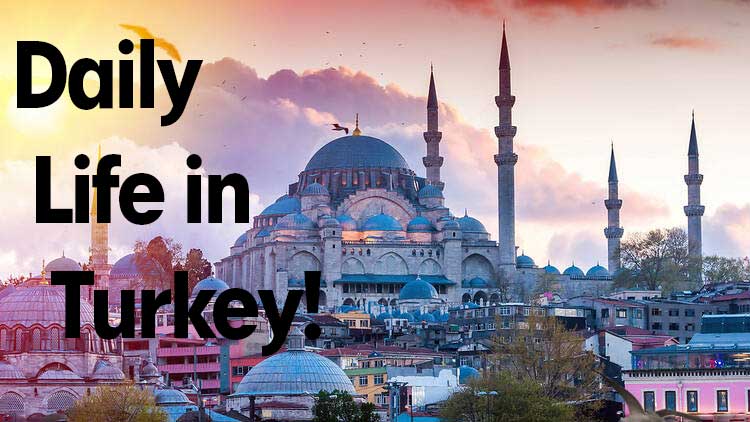 Turkey is a country located in the Eastern Mediterranean region, with a population of over 82 million people. The daily life of Turks varies greatly depending on their age, occupation, and location, but there are some general patterns that are common throughout the country.

In the morning, most Turks wake up between 6:00 and 7:00 am. After getting dressed and having breakfast, which typically consists of bread, cheese, olives, and tea, they go to work or school. Lunchtime is usually around noon, and the main meal of the day is often a combination of rice, meat, and vegetables. Dinner is usually a lighter meal and is typically eaten around 8:00 pm.

After work or school, many Turks like to relax by spending time with their families or engaging in leisure activities. Popular pastimes include watching television, going to the movies, or playing sports. Some also enjoy visiting cafes or restaurants, where they can socialize with friends and try new types of food.

Turkey is a predominantly Muslim country, so religion plays an important role in the daily lives of many Turks. Friday is the day of weekly congregational prayers, and many people attend mosque services on this day. The month of Ramadan, during which Muslims fast from sunrise to sunset, is also an important time for religious observances.

In terms of work, the majority of Turks are employed in the service sector, with a smaller percentage working in industry and agriculture. The country has a relatively high unemployment rate, but the economy has been growing in recent years.

Overall, the daily life of Turks is a balance of work, family, and leisure, with a strong emphasis on family and community.

Housing: In Turkey, many people live in apartments, particularly in urban areas. Some families may also live in houses, which can range in size and style depending on their location and the income of the family. In rural areas, it is more common to find people living in houses with large gardens or farm land.

Transportation: Public transportation is widely available in Turkey, including buses, trains, and metros. In larger cities, there is also a widespread network of minibuses, which follow a specific route but can be hailed like a taxi. Many people also own cars, which they use to get around the city or travel between cities.

Education: Education is compulsory for children aged 6 to 14 in Turkey. After primary and secondary school, many students go on to attend university. There are both public and private universities in the country, and the most prestigious tend to be located in Istanbul.

Entertainment: In addition to spending time with family and friends, Turks enjoy a variety of entertainment options. These can include watching television, going to the movies, visiting theme parks, or going to concerts or sporting events. Istanbul is home to a number of museums, galleries, and cultural centers, which offer a wide range of activities and events.

Places to Visit in Turkey! (Food Culture) (Basic Turkish Terms)
Turkey is a Mediterranean country with rich history and culture, delicious cuisine, and natural and cultural attractions. It has a...
0
YORUMLAR